By Alan Robinson
In a recent post, APWU President suggested that the Postal Service's financial problems has one cause and one cause only, the onerous payment schedule for funding retiree health plans. He is right that this is a serious problem. There are reasonable arguments that both the amount that Office of Personnel Management (OPM) says the Postal Service owes significantly overstates what the Postal Service actually owes and that payment schedule makes no sense for the enterprise. (See USPS-OIG white paper, PRC Report) Furthermore, the position that correctly measuring the Postal Service's CSRS payments by excluding obligations for time credited while not in USPS employment needs to be reexamined on its merits regardless of the Federal budget consequence.

Given the problems with retiree health plan expenses, I have come to think of the disagreement between the Postal Service and OPM in two ways
1. OPM, and Congress, by putting the payment terms in legislation, is acting as a creditor with overwhelming power over individuals that owe it money. It can both determine the amount of the debt using whatever assumptions it chooses make and change the payment schedule at whim.
2. OPM and Congress are acting like creditors with severe liquidity problems and see the Postal Service as borrower that it can squeeze to improve its financial position. In this position, the creditor is more concerned about its own finances than the impact that its actions have on debtors ability to operate as ongoing entity.
Unfortunately, even if the retiree health benefit disagreement was resolved to the Postal Service's satisfaction, it would still leave the Postal Services earning losses for many years to come. The following graph illustrates losses under the current legislated payment schedule. The graph was presented by Mary Anne Gibbons Senior Vice President & General Counsel U.S. Postal Service Linda A. Kingsley Senior Vice President, Strategy & Transition U.S. Postal Service presented in their presentation at the Center for Research in Regulated Industries Workshop on November 20th (Page 8 of the presentation: A New Business Model for the United States Postal Service) 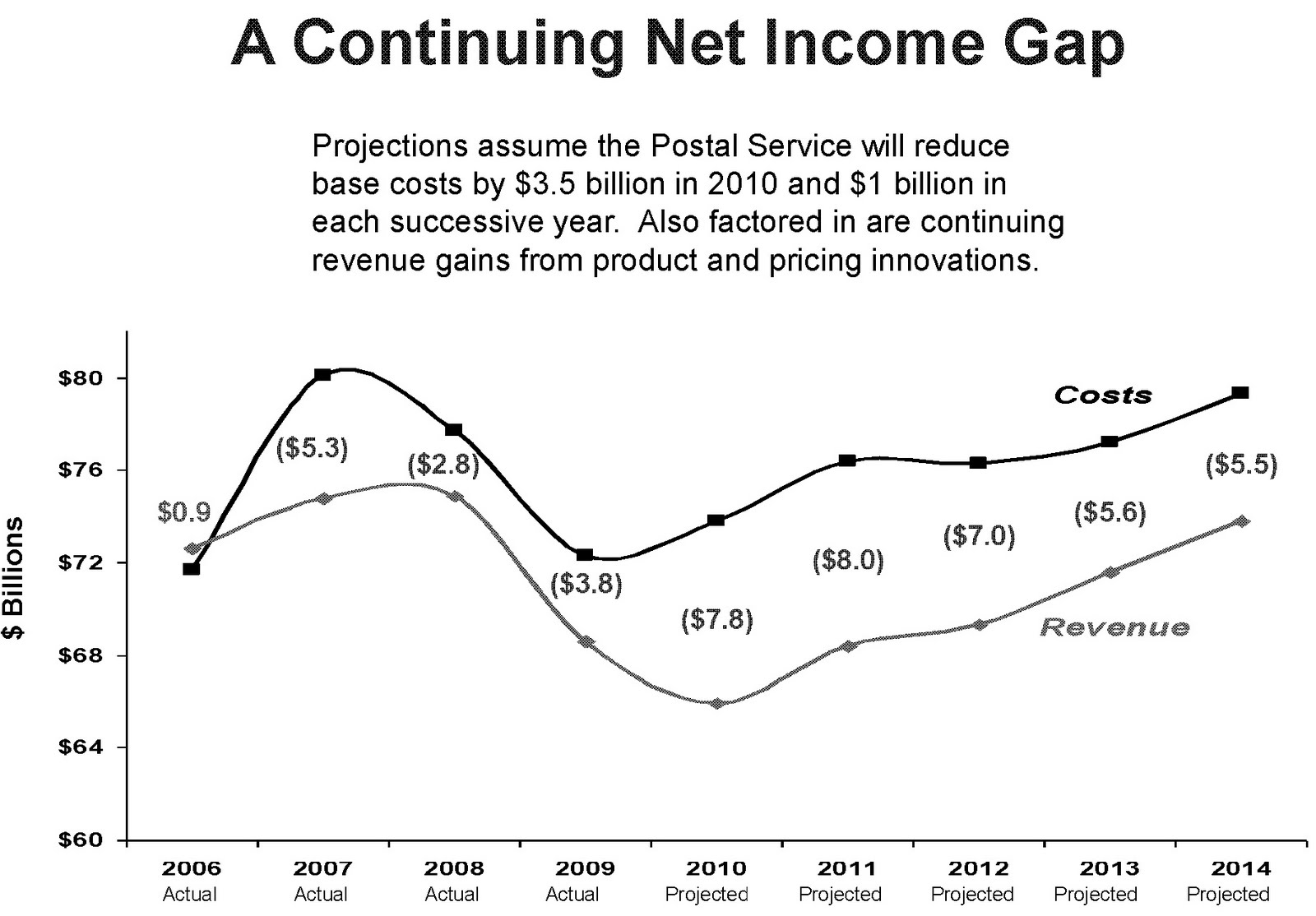 Now what happens to that gap if one changes the Postal Service's payment for retiree health benefits in order to fund various measures of its unfunded liability. The next chart compares current law with payment estimates calculated by the USPS-OIG, PRC and one assuming that the entire pre-funding obligation is covered in over payments in CSRS obligations. This chart shows that all potential options result in losses through 2012. Eliminating additional pre-payment of retiree obligations puts the Postal Service to break even in 2013 and earn a minuscule profit, assuming a long range revenue forecast is right in 2014. All other payment schedules continue to generate losses through 2014. 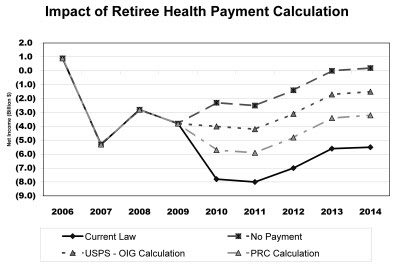 This graph uses the Postal Service's numbers with little information on the Postal Service's long range pricing and revenue generation strategy, its plans to manage operating costs and overhead; and its capital spending plans including whether those plans are sufficiently robust to make the investments necessary to sustain the business or maintain its existing its existing infrastructure.

Given these projections, financial insolvency appears inevitable without a combination of 1) change in the pre-funding requirement; 2) additional revenue from existing products; and substantial cuts in operating costs beyond what attrition generates. These projections suggest that Congress, in trying to develop a new business plan will likely have to deal with the challenge of funding operating losses for the foreseeable future unless there are significant changes.
Alan Robinson is President at Direct Communications Group. E-mail him at alan.robinson@directcomgroup.com
DMM Advisory: Intelligent Mail Service Update and More News Next
Season's Greenings from the U.S. Postal Service Previous
More from News
The PRINTING United Digital Experience Provides a Guided Tour of State-of-the-Art Programming with Unlimited Access to a Comprehensive Exhibitor Product Showcase
Sarah Corrigan Joins IWCO Direct as Senior Vice President Human Resources/Environment Health and Safety
Crawford Technologies Receives Exceedingly High Net Promoter Score for the Third Consecutive Year
More From Alan Robinson
The Future of the Document Is the Future of Mail 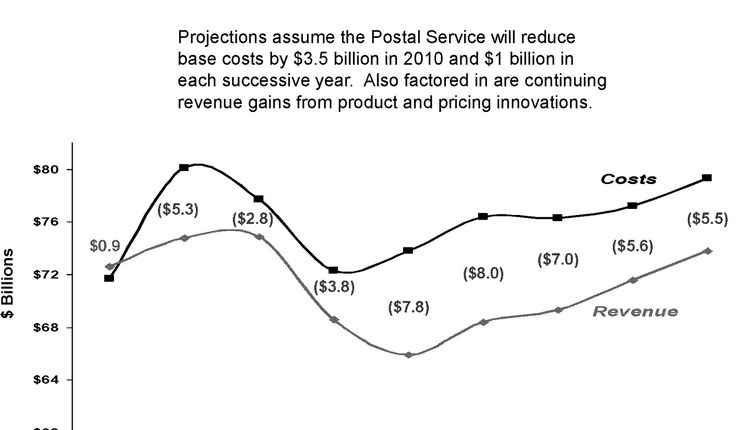